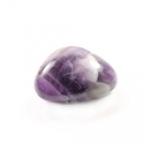 Amethyst is one of the most famous and prominent quartz crystals because of its beautiful coloration as well as its spiritual and literal meaning.

The name comes from the Greek amethystos a-, “not” methysko “intoxicate”, a reference to the belief that the stone protected its owner from drunkenness. The ancient Greeks wore amethyst and carved drinking vessels from it in the belief that it would prevent intoxication.

In Ancient Egypt, Amethyst was known as “Hemag.” It was carved into hearts and worn as amulets by travellers to keep them safe from being taken advantage of or attack and during burial ceremonies with pieces dating as far back as 3000 BCE. An Amethyst Scarab beetle shaped was found in Tutankhamun’s tomb.

The Hebrews called Amethyst “Ahlamah,” which was derived from the Hebrew word, “halam,” which means “to dream.” Still knowns as the “Dream Stone” it is believed that it can help deter nightmares while giving more positive, vivid dreams.

Beads of amethyst were found in Anglo-Saxon graves in England. Medieval European soldiers wore amethyst amulets as protection in battle in the belief that amethysts heal people and keep them cool-headed.

Anglican bishops wear an episcopal ring often set with an amethyst. In the Catholic religion, Amethyst was used in prayer beads and rosaries. It was known as the Bishop’s Stone because it symbolized ecclesiastical dignity. Today, Bishops still wear it on the second finger of their right hand as it gives clergymen the power of restraint so that they could uphold their vows.

For the Chinese practitioners of Feng Shui, Amethyst can be used to transform lower vibrations into positive ones.

Buddhists believe amethysts to be a sacred stone to Buddha and use prayer beads of amethysts. In ancient times, Amethyst was known as a “Gem of Fire,” because it was thought to hold the energy of fire, which is passionate, creative, and spiritual in nature. In the Eastern world, Amethyst was used in the tree of life, in the gem cities, and in temples of worship. It was also used in offerings and for spiritual practices and meditation.

The colour purple has historically been associated with royalty due to the costly process and expensive nature of making purple dye. As a stone of royalty, it was used in crowns, sceptres, and jewellery by the royal house because it helped leaders with decision-making. One of the oldest surviving crowns with amethyst jewels is the “Iron Crown of Lombardy” from Italy and dates to the early Middle Ages. It is alleged that the crown contains a band of iron from the crucifixion nails of Christ. The golden crown is decorated with 22 gemstones, 7 red garnets, 7 blue sapphires, 4 violet amethysts and 4 gems made of glass.

In 1660, upon the restoration of the monarchy by Charles II of England, Amethyst was used as the centrepiece for the recreated crown jewels.

The Cursed Amethyst also known as the “Blasted Amethyst” is legend of a jewel looted from the Temple of Indra in Kanpur during the Rebellion of 1857. Brought to England by cavalryman Colonel W. Ferris. Soon after returning to England Ferris lost his life’s savings and passed away.  His son inherited the jewel and began having misfortune.   The Colonel’s son gave the jewel to a friend who had admired the gem. Shortly after receiving the jewel this friend committed suicide, willing it back to the previous owner.

In 1890 the Blasted Amethyst fell into the possession of Edward Heron-Allen, a 19th-century author and musician. Yet he soon found himself rattled by a series of disasters. Smitten by the voice of a Lady friend, unaware of its past Edward gave her the jewel. The Lady soon fell ill and lost her voice never to sing again. After learning the gems history, Edward reclaimed the Jewel, vowing to get rid of the Blasted Amethyst for good and tossed the jewel into the Regent’s Canal. However, three months later the stone was returned to him after dredgers found the stone in the canal.

Edward finally decided to lock the jewel away in a bank vault. Encased within seven locked boxes. Instructing the bank to donate the Jewel to the Natural History Museum of London three years after his death and to never let his daughter touch the Blasted Amethyst.