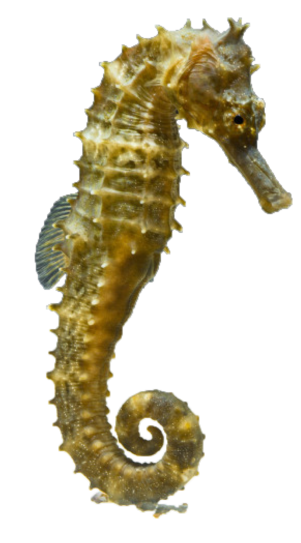 Until you see one for yourself in real life, it’s easy to believe that seahorses are mythical creatures out of a fairy tales and sagas. Even the dead, dried up seahorses seem to hold a magical power, half dragon half reptile.  Indeed, they are called Hippocampus from the Ancient Greek hippókampos “horse” and kámpos meaning “sea monster”.

Legend has it that Poseidon, the Greek sea god rode through the oceans on a golden chariot pulled by Seahorses Ancient Greek fishermen believed that when they found Sea horses tangled in their nets, they were the offspring of Poseidon’s steeds.

Throughout the Mediterranean, art and objects depict the Sea horse. Phoenicians and Etruscans often painted these on the walls of burial chambers so that they could carry the dead on their voyage across the seas and into the afterlife.

Scottish “kelpies” dwell in the lochs and come onto dry land to graze with land horses. However, should you try and ride one you will be dragged out to sea and drowned. Further north in the Orkneys they are called “tangies” and “shoopiltrees” in the Shetlands.

Scandinavian legends tell of the “havhest”, a huge sea serpent, half horse and half fish that could breathe fire and sink ships.

An ancient Mexican tribe called the Seri has a seahorse legend.  A Long ago, when the animals talked and wore clothes, there was a fat seahorse who lived on Tiburon Island. The seahorse was a known trickster Having a wrongdoing, all the other animals who chased the seahorse by throwing rocks and stones. He fled to the seashore and, with nowhere to run, tucked his sandals into his belt and dived into the sea, never to return. This is why seahorses are scrawny and thin and covered in armour where his shoes once were is now a little fin.

On the Indian Ocean Island of Zanzibar, fishermen sometimes burn seahorses and sprinkle the ashes overfishing nets to bring good fortune and lure in more fishes. Whilst Malaysia and the Philippines fishermen hang dried seahorses about their homes as talismans to dispel evil spirits. Seahorses protect money and bring prosperity in Mexico and Indonesia.

Roman writer Dioscorides, In the first century CE, compiled a book of herbal medicines. Among the ingredients were seahorses which he claimed, can be mixed with goose fat and smeared on a balding scalp to restore a full head of hair!

Pliny the Elder also advocated the use of seahorses as cures for leprosy, urinary incontinence and fever.

Roman writer, Aelian, claimed that seahorses could cure a bite from a rabid dog by counteracting the hydrophobia induced by rabies “eat a seahorse and you’ll spend the rest of your life drawn inexorably to the soothing sound of babbling rivers and streams” He also wrote that a seahorse boiled in wine is a deadly poison

Whilst in the west we can disbelieve the medicinal claims of Seahorse. However, in Chinese medicine seahorse are still an essential component despite any supporting clinical evidence.  The practitioners of Chinese herbal medicine promote its benefits to ease impotence, wheezing, nocturnal enuresis, and pain, as well as inducing labour. 20 million seahorses are caught each year to the extent that Seahorse populations are endangered because of overfishing and habitat destruction.