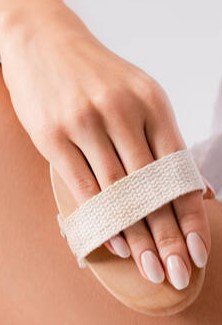 Exfoliation is the removal of the dead skin cells on the skin’s surface. Exfoliation can be performed mechanically by using abrasive scrubs on the skin or chemically by using scrubs that dissolve and remove the dead skin cells.
What is Exfoliation
As we age, the process of cell regeneration slows down. This means that the body is slower to shed skin cells and generate new ones. When old skin cells start to pile up on the surface of the skin, it can leave skin looking dull, rough, and dry. Even in mature people this can result in excess oil and clogged pores leading to blemishes and spots.
Exfoliation (desquamation) is the shedding of the outer layers of the skin. For example, after sunburn (never good), there is desquamation. This word comes from the Latin, “desquamate”, meaning to scrape the scales off a fish!

Whilst it is something that sounds like we should do enthusiastically each day, scrubbing (mechanical exfoliation) away skin with abrasive materials and harsh chemicals can do significant harm especially for people with split / broken skin or skin conditions. It best to do this only once a week, as over exfoliation will end up doing more damage than good.

The Egyptians not only practiced exfoliation but that they had several different methods. Royalty used wine as an exfoliating agent. The tartaric acid contained within the wine worked as the active exfoliating agent. One popular exfoliant documented in the Ebers Papyrus listed a recipe for an exfoliant, of one part each of: sea salt, natron, powdered alabaster and honey. Pumice stones were popular abrasives as well as scrubs made from sand and the aloe vera plant. This early version of a gommage exfoliator, a gel that is rich in enzymes. was used frequently by men who wanted a more youthful appearance.

Cleopatra is famously said to have regularly bathed in the milk of donkeys. Whilst it may sound purely decadent, there was a lot of science behind it. The milk was sour and fermented to yield a high concentration of lactic acid (alpha hydroxy acid) also known as AHA, still used in modern day exfoliants.
China The Chinese made exfoliating masks from oils and minerals

Polynesian people would use crushed seashells.

Native Americans Exfoliation was widely recognized in many Native American tribes. The most used exfoliant was dried corn cobs rubbed over their body. Like the way in which we would use a dry brush today. The Comanche tribe used sand from the bottom of a river to scrub their skin because the sediment contained more minerals and compounds.

In the Middle Ages, old wine was commonly used as a chemical exfoliant, and it was extremely effective due to the high concentration of acids in old wine. We deal with naturally occurring acids each day and are found in cane, fruits, wine, and milk.

Until the early 1800s, many ingredients that naturally contained a high level of AHAs were used as chemical exfoliants. The popularity of this died down once a German dermatologist Gerson Unna began scientifically formulating the earliest forms of chemical peels. His pioneering research with salicylic acid is still used today.

During the 1970’s, exfoliation became increasingly popular in the Western world, when spas and dermatologists began offering a process called gommage. A special enzyme infused cream would be applied to a client or patients face, left to rest for a few minutes until it hardened, and would then be removed through a process of rubbing the skin. It was an effective method for its time but was rather messy. Since then, a variety of substances have been used to peel, exfoliate, and rejuvenate the skin. These include the use of acids, poultices of minerals and plants, and direct irritants such as fire and sandpaper like materials.
Should we Exfoliate at all?

As we age, the glue like intercellular cement holding the cells together becomes thicker. This results in a build up in the layers of skin cells. The skin sloughing process then becomes more difficult to accomplish and the skin has a thicker, less-toned appearance. This process can be influenced by the environment, hormones and vitamin deficiencies (A and D). By eliminating the build up of dead regeneration of new skin cells is stimulated, resulting in an improved appearance, tone, and feel of the skin.

In recent years, retinol (vitamin A) has been included in exfoliation formulas because the skin converts retinol to retinoic acid, a potent skin exfoliation and anti-aging agent. When used daily, studies show that retinol improves the signs of photo-aging as well as normal chronological aging. Other studies also showed that retinol slowed down the degradation of collagen in the skin due to sun exposure

Are natural methods the best?

Not necessarily. A lot of “natural” exfoliants use) or a substance (i.e. salt, sugars, corncob meal, rice bran, oatmeal). These cause microdermabrasion which is the most forceful of the mechanical methods. It loosens and reduces the outer layer of cells when friction and abrasion are applied. The outcome varies depending on the amount of friction applied and the abrasive used. It is important to note that excessive abrasion can result in skin irritation.

Therefore, the International Dermal Institute does not recommend the use of crushed fruit pits, shells, or similar substrates.

If you are using Retin-A, Renova or any other exfoliating product, you should discontinue for at least two weeks before trying another form.

If you are taking acne medicine or have taken acne medication within the last six months, you should not have any kind of exfoliation treatments.

Do not perform or receive any type of exfoliation on burned or irritated skin, or skin that has been waxed within the past 24 hours.

Also, the dead outer layer of the skin acts as a sun shield; with less of the layer, you are more susceptible to sun damage. It then becomes more important to use a daily sunscreen with an SPF of at least 15 after an exfoliation treatment.

Whether you choose a mechanical or chemical means of exfoliation, each can be of benefit and provide enhancement for your skin. Consistent exfoliation prevents clogged pores, acne, ingrown hairs, and certain types of infection. It can also prevent scarring blemishes and help to reduce the appearance of existing scars. Exfoliation can also increase circulation and help to make the other steps in your facial regimen (i.e. toners, cleansers, and moisturisers) more effective by unblocking the pores for better absorption.

It is worth the time to find the right exfoliation agent for your specific skin type and needs. And of course, always use caution and heed the warnings associated with the exfoliation process of your choice.