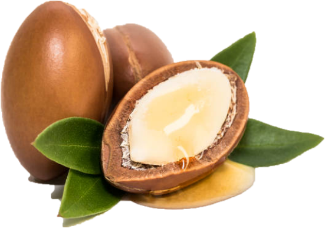 Many people have heard of Argan oil as it is often used in shampoo, but why is it put in there? Few know about its unique properties.  Argan is one of the most underestimated but also ecologically beneficial crop.  Mainly grown in Morocco where it provides a food source for humans and animals, fuel, shade, provides independence for female workers and helps resist climate change, prevents soil erosion and desert encroachment.

Argan oil is eaten like olive oil. In Morocco, Amlou, a paste like peanut butter, is used locally as a bread dip. produced by grinding roasted almond and argan oil using stones, and then mixing the argan oil and almonds in honey. Argan oil is also drizzled on couscous or pasta.

The fruit of the argan tree is small and round. A thick peel covers the fleshy pulp which surrounds a hard-shelled nut containing one to three oil-rich argan kernels. Extraction yields from 30% to 50% of the oil in the kernels, depending on the extraction method. It takes an estimated 2.3kg of argan kernel to produce a litre of the oil.

The months from July to October are busy for members of a local women’s co-operative, who wake early to collect the fruit which fall from the tree. Leave it later in the morning, goats will eat the fruit. A tradition in some areas of Morocco was to allow goats to climb argan trees to feed freely on the fruits. The kernels are retrieved from the goat droppings, considerably reducing the labour. We don’t use oil collected by this method! Instead women crack the shells by hand in a tradition going back centuries.
The Argan kernels are divided between those destined for cosmetics and culinary use. The only difference is that culinary Argan is roasted before pressing giving it a brown colour and nutty smell and taste. Cosmetic Argan oil is colourless.

The argan tree provides food, shelter and protection from encroaching deserts. The argan trees are interspersed with almond, olive and jujube trees deep roots help prevent desert encroachment. The leaves of argan trees also provides shade for other agricultural products. The leaves and fruit provide feed for animals. The argan tree also helps landscape stability, helping to prevent soil erosion, providing shade for pasture grasses, and helping to replenish aquifers (underground water reservoirs). Even the production waste is pressed into cattle cake and the shells are burned for firewood.
Producing argan oil has helped to protect historic argan trees from being cut down. The local government has funded the annual planting of around 300 hectares of saplings to protect this valuable industry for future generations.

Much of the argan oil produced today is made by women’s co-operatives. Employment in the co-operatives provides women with an income. Many have used to fund education for themselves or their children. It has also provided them with a degree of autonomy in a traditionally male-dominated society and has helped many become more aware of their rights. Whenever an order is placed, it is designated to one of the village groups which produce it in full. This ensures that each delivery batch can be traced back to the workers who prepared it. This certifies that the oil produced is high quality, traceable and fresh. The co-cooperative arranges training and monitoring for each co-operative to help them all reach ECOCERT organic and FairTrade status.

Argan oil is primarily comprised of fatty acids and a variety of phenolic compounds. Approximately 29–36% of the fatty acid content of argan oil comes from linoleic acid, or omega-6, making it a good source of this essential oil
Argan oil is a rich source of oleic acid, though not essential, makes up 43–49% of the fatty acid composition of argan oil and is a very healthy fat (monounsaturated, omega-9 fat). Found in avocado and olive oil as well, oleic acid is renowned for its positive impact on heart health. The oleic and linoleic acids that make up the majority of argan oil’s fat content are vital nutrients for maintaining healthy skin and hair. Argan oil is often directly administered to skin and hair but may also be effective when ingested.,
Argan oil is a rich source of vitamin E (tocopherol), whi ch is required for healthy skin, hair and eyes. This vitamin also has powerful antioxidant properties to reduce the damaging effects of free radicals.

Argan oil has quickly become a popular ingredient for many skin care products. Some research suggests that dietary intake of argan oil may help slow the aging process by reducing inflammation and oxidative stress. The antioxidant and anti-inflammatory compounds may support reduced redness and irritation of the skin caused by acne. Some studies show argan oil both taken orally and administered to the skin to be effective for increasing skin elasticity and hydration in postmenopausal women

It may also support repair and maintenance of healthy skin when applied directly to your skin, thus reducing visual signs of aging. Some research indicates that argan oil can also be applied directly to your skin to reduce inflammation caused by injuries or infections. Argan oil is frequently used to prevent and reduce stretch marks, although no research has been conducted to prove its efficacy You can apply argan oil directly to damp or dry hair to improve moisture, reduce breakage, or reduce frizz. It is also included in shampoos or conditioners. If it’s your first time using it, start with a small amount to see how your hair responds. If you have naturally oily roots, apply argan only to the ends of your hair to avoid greasy-looking hair.